Easy Video Press is a WordPress Plugin that makes it very easy to play videos on your WordPress blogs.  You can play videos uploaded from Amazon S3, YouTube or your computer.

You also have the option of customizing the video player – e.g. color of the background, buttons or outline.  You can change the size of the displayed video and allow full screen playing.  If you prefer, you can set the Easy Videos Player to play immediately someone visits your blog post (… and you can change this for each video).

Easy Video Press comes with four very short videos that explain each step in the process of setting up the Plugin and creating a video player for your blog post.

Easy Video Press enables you to add a hyperlinked logo to your video and build in a redirect to a website of your choice so that you can monetize the video.  I have illustrated these features in the video player below:

This is a powerful WordPress Plugin that can open up the world of video marketing.  It is easy to use and makes video playing on your WordPress blog so much easier.

All you have to do is install the WordPress plugin, customize the default settings (e.g. Amazon S3 URL’s, color scheme, video size) and then start using the video player within your blog posts.

The following illustration shows the control panel that appears below your blog entry as you are developing your post.  It enables you to: 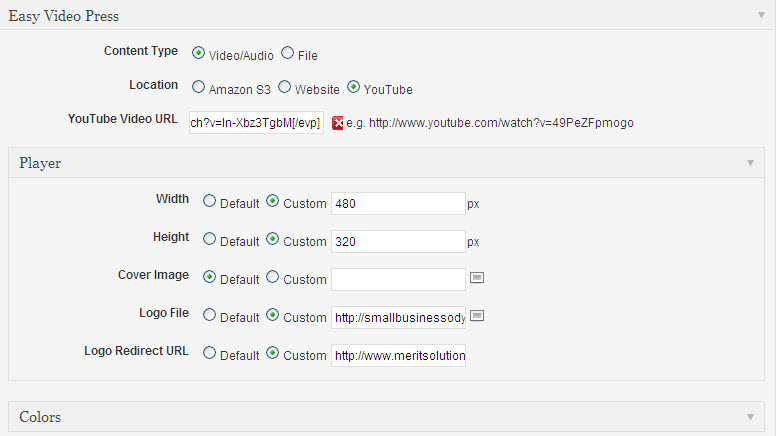 If you want to use the advanced options available with Easy Video Press, you can do any of the following: 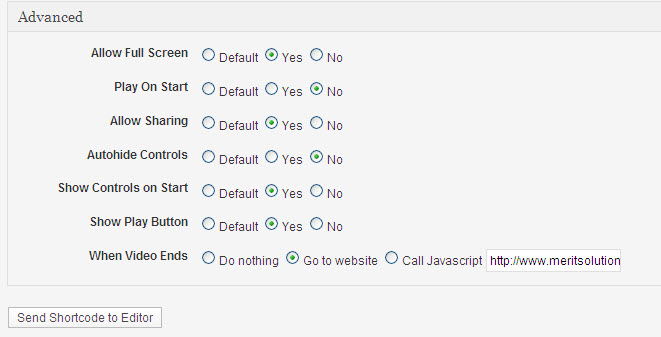 With either the basic or the advanced controls, Easy Video Press will generate a shortcode that is automatically inserted in your blog post when you hit the “Send Shortcode to Editor” button.  You can then locate the video player wherever you choose within your post.

I was becoming increasingly frustrated with displaying videos on my WordPress blogs until I found this simple-to-use WordPress Plugin.

Easy Video Press is, as the name suggests, an easy-to-use WordPress Plugin that will take the stress out of your blogging and enable you to professionally display, and monetize, videos on your WordPress blogs. 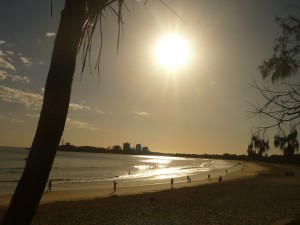 A WordPress Plugin is software that extends the functions of the basic WordPress program.  Plugins enable you to import or export information, increase the security of your blog, enhance search engine optimisation (SEO) and undertake an endless range of tasks designed to improve the functionality of your WordPress blog.   When I last looked there were over 17,00 plugins in the WordPress Directory (with over 235 Million downloads).

WordPress makes it very easy to install plugins.  There are a series of steps you can follow which are guaranteed to work 95% of the time, so have a go without fear.  I will list out the steps here, so you can follow easily.

To locate a WordPress Plugin, you can visit the WordPress Directory, search available plugins from within the admin area of your blog or undertake a Google search for the specific WordPress Plugin you are looking for. Many WordPress Plugins are free but some of the more sophisticated ones have a fee.  Important Note: For most plugins you will download a zip file which you should place in a designated folder on your computer (I call mine “WordPress Plugins”).

Step 2: Upload the WordPress Plugin to your blog

There is a Plugin Section in the Admin menu (yourblogURL/wp-admin) of your WordPress blog.  As the following image shows, the options available under this menu section are “Installed Plugins”,  “Add New”, “Editor” and “Akismet Configuration”.   Akismet is one of the installed plugins that comes with your basic WordPress blog and is designed to handle comment spam.

You need to click on the “Add New” option and the following image will display.  Here I have subsequently clicked on “upload” (bolded) to start the upload process: 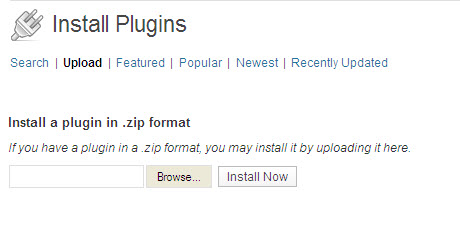 You then use the “browse” button to locate the zip file for the WordPress Plugin on your computer.  Once you have highlighted the file in the relevant folder on your computer, you press the “INSTALL NOW” button.  Note:  WordPress Plugins are usually uploaded as zipped files (do not unzip the file unless specifically instructed to do so by the developer).

You need to make sure you click the “activate” button once you see that the Plugin has been successfully uploaded.  This activate button effectively integrates the Plugin with the WordPress Program.   Once a plugin has been uploaded, it is added to the Installed Plugins list.

Each Plugin comes with its own set of instructions re setup and operation.  In most cases, you will need to complete some data fields to specify what options you want.  For example, in the installed plugin listing for the All in One SEO Plugin you will see this set of instructions/options:

A WordPress Plugin can open up a whole new world of functionality for your WordPress blog and enable you to automate many tasks associated with blog post and comment management, marketing of your small business online and presentation of information to readers and the search engines.